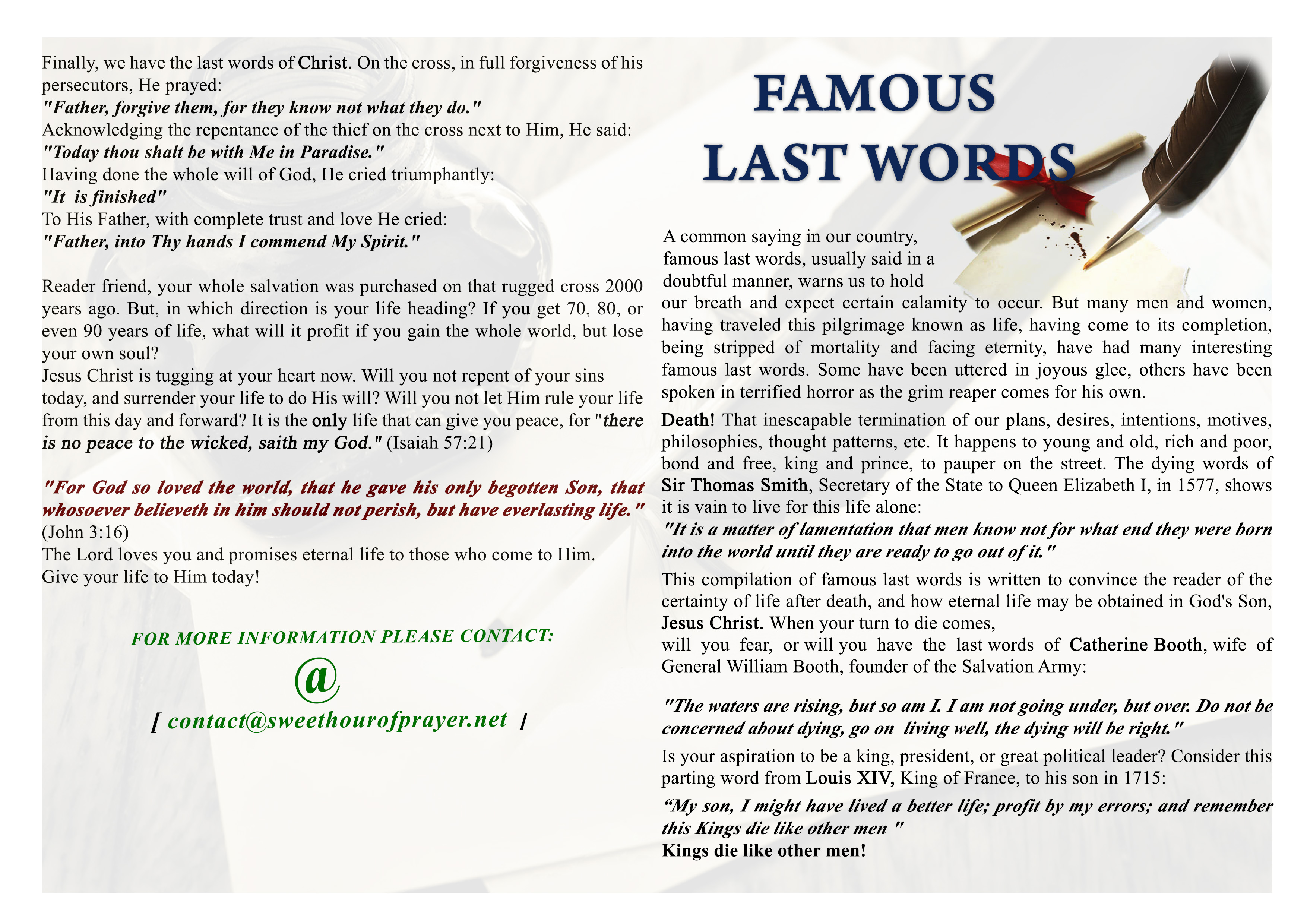 A common saying in our country, famous last words, usually said in a doubtful manner, warns us to hold our breath and expect certain calamity to occur. But many men and women, having traveled this pilgrimage known as life, having come to its completion, being stripped of mortality and facing eternity, have had many interesting famous last words. Some have been uttered in joyous glee, others have been spoken in terrified horror as the grim reaper comes for his own.

Death! That inescapable termination of our plans, desires, intentions, motives, philosophies, thought patterns, etc. It happens to young and old, rich and poor, bond and free, king and prince, to pauper on the street. The dying words of Sir Thomas Smith, Secretary of the State to Queen Elizabeth I, in 1577, shows it is vain to live for this life alone:

“It is a matter of lamentation that men know not for what end they were born into the world until they are ready to go out of it.”

This compilation of famous last words is written to convince the reader of the certainty of life after death, and how eternal life may be obtained in God’s Son, Jesus Christ. When your turn to die comes,

will  you  fear,  or will you  have  the  last words  of Catherine Booth, wife of General William Booth, founder of the Salvation Army:

“The waters are rising, but so am I. I am not going under, but over. Do not be concerned about dying, go on  living well, the dying will be right.”

Is your aspiration to be a king, president, or great political leader? Consider this parting word from Louis XIV, King of France, to his son in 1715:

“I have been everything, and everything is nothing. A little urn will contain all

that remains of one for whom the whole world was too little.”

Caliph Abd – Er – Rahman  Ill (961 A.D.), Sultan of Spain, had experienced the misfortune of having happiness escape from his grasp:

“Fifty years have passed  since first I was Caliph. Riches, honors, pleasures, I have enjoyed all. In this long time of seeming happiness, I have numbered the days on which I was truly happy-fourteen! ”

Imagine that! In 50 years as a ruler, only 14 days were spent in happiness .

Perhaps you  are pursuing  the  philosophy  of the atheist  or agnostic. Most of these folks would like to escape the responsibility of their lives before  God by proclaiming that He doesn’t exist. They have made themselves “willingly ignorant” of the fact that “By the word of the Lord were the heavens made, and all the host of them by the breath of His mouth.” (Ps 33:6) Once such man was Voltaire, famous French philosopher and infidel of  the  19th century.  Of Christ, he once said: “Curse the wretch.”

He once boasted,  “In 20 year s Christianity  will be no more. My single hand

shall destroy the edifice it took twelve apostles to rear.”

His end was terrifying: “I am abandoned by God and man! I will give you half of what I am worth if you will give me six months life, then I shall go to hell and you will go with me! Christ, O Jesus Christ!”

Unfortunately, his day of grace was long past.

Thomas Paine was the famous American patriot and infidel who authored the blasphemous and anti-biblical book entitled Age of Reason. He showed the same horrible end:

“I would give worlds, if I had them, that Age of Reason had not been published . 0 Lord help me! Christ help me! 0 God what have I done to suffer so much? But there is no God! But if there should be, what will become of me hereafter? Stay with

Me for God’s sake! Send even a child to stay with me, for it is hell to be alone. If ever the devil had an agent, I have been that one.”

Even some servants of God, upon termination of this life, have questioned their own life’s usefulness. Thomas Wolsey, Roman Catholic Cardinal and statesman during the reign of Henry VIII, had this deathbed comment:

“If I had served God as diligently as I have done the king, He would not have given me over in my grey hairs. But this is the just reward that I must receive for my diligent pains and studies that I have had to do him service, and not regarding my services to God, but only to satisfy the king’s pleasure. ”

Compare that saying with the last  words of Matthew Henry, famous English theologian:

’14. life spent in the service of God, and in communion with Him, is the most comfortable life that one can lead in this present  world.”

Also Jonathan Edwards, eminent revivalist preacher of the mid-eighteenth century, was very happy his number was up. His parting words: “Where is Jesus, my never failing Friend? ”

A list of famous last words would not be complete without the sayings of some martyrs; those who have given their lives for the sake of Christ, not counting their lives dear unto themselves for the sake of the truth and the gospel. Polycarp was such a one. This second century martyr, being commanded by the Roman proconsul of his city to recant and blaspheme Christ, had this answer :

“Eighty and six years have I now served Christ, and He has never done me the least wrong; how then can I blaspheme my King and Savior? ”

As he was being burned at the stake, he offered up nothing but praise to God for keeping him, for saving him, and for allowing him to be in the company of the martyrs.

One century later, a man named Andronicas, after being scourged and his bleeding wounds rubbed with salt, was thrown to the wild beasts and then killed with the sword . His last words:

“Do your worst! I am a Christian; Christ is my help, and supporter, and thus armed I will never serve your gods, nor do I fear your authority or that of your master, the emperor1: Commence your torments  as soon as you please, and make use of every means your malignity can invent, and you shall find in the end that I am not to be shaken from  my resolution.”

Compare these with the end of one persecutor of the church. Stephen Gardiner, 16th century Bishop of Winchester. This bloodthirsty tool of the Catholic rulers of his day died of a fatal disease with curses on his lips:

Finally, we have the last words of Christ. On the cross, in full forgiveness of his persecutors, He prayed:

“Father, forgive them, for they know not what they do.”

Acknowledging the repentance of the thief on the cross next to Him, He said:

“Today thou shalt be with Me in Paradise.”

Having done the whole will of God, He cried triumphantly:

To His Father, with complete trust and love He cried:

“Father, into Thy hands I commend My Spirit.”

Reader friend, your whole salvation was purchased on that rugged cross 2000 years ago. But, in which direction is your life heading? If you get 70, 80, or even 90 years of life, what will it profit if you gain the whole world, but lose your own soul?

Jesus Christ is tugging at your heart now. Will you not repent of your sins

today, and surrender your life to do His will? Will you not let Him rule your life from this day and forward? It is the only life that can give you peace, for “there is no peace to the wicked, saith my God.” (Isaiah 57:21)

“For God so loved the world, that he gave his only begotten Son, that whosoever believeth in him should not perish, but have everlasting life.” (John 3:16)

The Lord loves you and promises eternal life to those who come to Him.

Give your life to Him today!