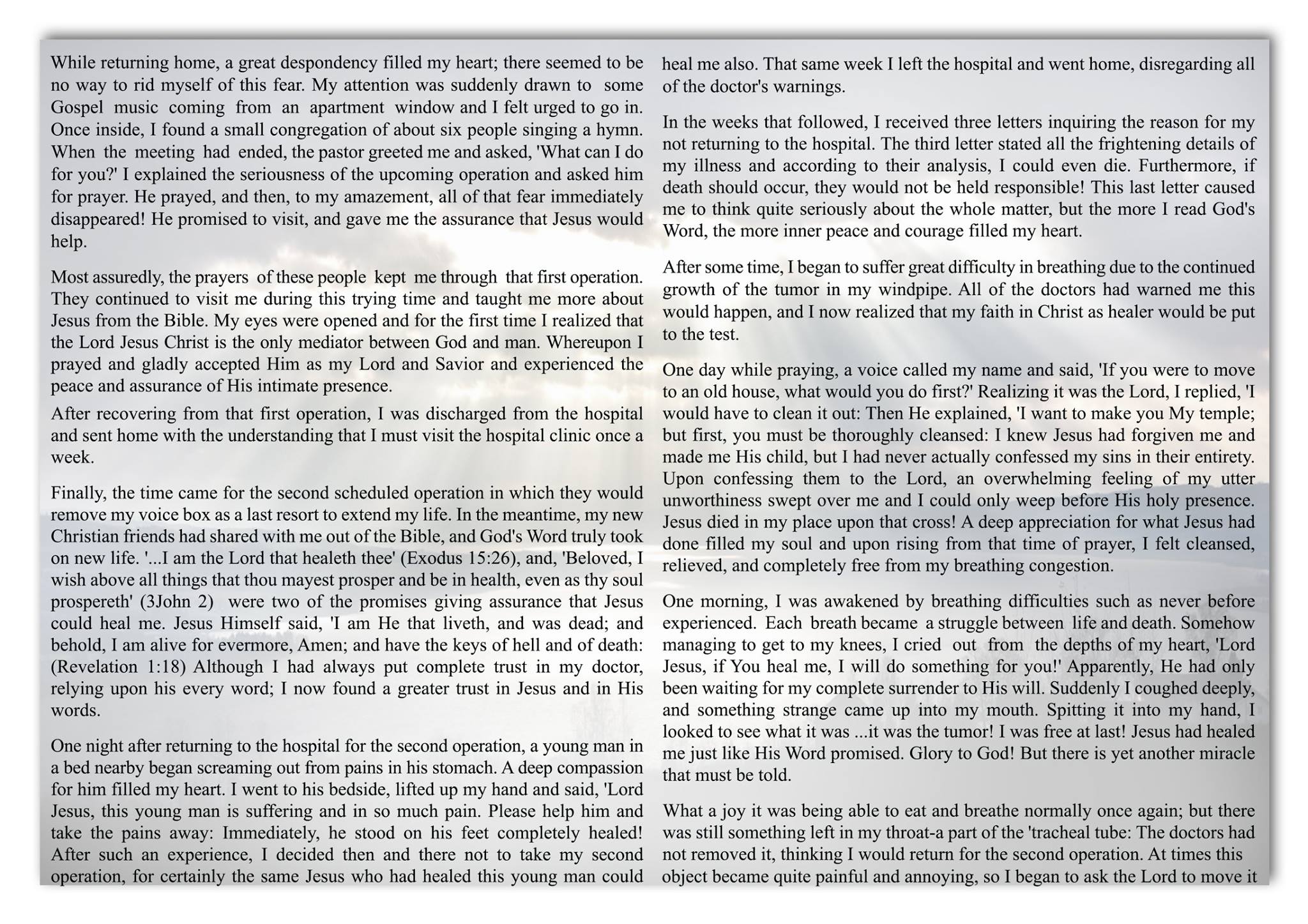 Life meant a great deal to me. My wife, two children, and I felt we had much to look forward to until the doctor told me that I only had a short time to live due to a tumor growing in my windpipe . The only possible way of extending my life would be to go through a series of operations in order to have it removed along with my voice box. Such a crisis brought my life to a drastic halt.

After several biopsies, I went for the first operation. It should have only taken one hour, but it lasted all day. The agony of that experience was unbearable. Upon waking, I discovered that my throat had been cut open, and a ‘tracheal tube’ had been inserted. I could only speak by placing my thumb over the     opening of this tube.

One evening about ten days after the operation (which was said to be successful), blood suddenly began filling my mouth. I quickly called for the nurse. Soon there were several doctors frantically trying to stop this vomiting of blood which continued for over three hours. ‘We have tried everything!’ declared one doctor in his desperation. Realizing the closeness of death, I helplessly cried out, ‘Lord Jesus, help me!’ Instantly the bleeding stopped.

It had to be something about the name of JESUS! Why? Well, let me explain what took place just before this first operation.

A great  fear  had suddenly overcome me while waiting  for this operation, and I decided to seek consolation at my church. All my life I had been under the       impression that God was somewhere far away,  and that Mary, the mother of Jesus, was the mediator between God and man. I also had a favorite ‘saint’ to whom I prayed in times of difficulty. So that Sunday I prayed with all my strength, but to my disappointment, I left the church in the same way I had  entered it.

While returning home, a great despondency filled my heart; there seemed to be  no way to rid myself of this fear. My attention was suddenly drawn to  some  Gospel  music  coming  from  an  apartment  window and I felt urged to go in. Once inside, I found a small congregation of about six people singing a hymn. When  the  meeting  had  ended, the pastor greeted me and asked, ‘What can I do for you?’ I explained the seriousness of the upcoming operation and asked him for prayer. He prayed, and then, to my amazement, all of that fear immediately disappeared! He promised to visit, and gave me the assurance that Jesus would help.

Most assuredly, the prayers  of these people  kept  me through  that first operation. They continued to visit me during this trying time and taught me more about Jesus from the Bible. My eyes were opened and for the first time I realized that the Lord Jesus Christ is the only mediator between God and man. Whereupon I prayed and gladly accepted Him as my Lord and Savior and experienced the peace and assurance of His intimate presence.

After recovering from that first operation, I was discharged from the hospital and sent home with the understanding that I must visit the hospital clinic once a week.

Finally, the time came for the second scheduled operation in which they would remove my voice box as a last resort to extend my life. In the meantime, my new Christian friends had shared with me out of the Bible, and God’s Word truly took on new life. ‘…I am the Lord that healeth thee’ (Exodus 15:26), and, ‘Beloved, I wish above all things that thou mayest prosper and be in health, even as thy soul prospereth’ (3John 2)  were two of the promises giving assurance that Jesus could heal me. Jesus Himself said, ‘I am He that liveth, and was dead; and behold, I am alive for evermore, Amen; and have the keys of hell and of death: (Revelation 1:18) Although I had always put complete trust in my doctor,          relying upon his every word; I now found a greater trust in Jesus and in His words.

One night after returning to the hospital for the second operation, a young man in a bed nearby began screaming out from pains in his stomach. A deep compassion for him filled my heart. I went to his bedside, lifted up my hand and said, ‘Lord Jesus, this young man is suffering and in so much pain. Please help him and   take the pains away: Immediately, he stood on his feet completely healed!    After such an experience, I decided then and there not to take my second   operation, for certainly the same Jesus who had healed this young man could heal me also. That same week I left the hospital and went home, disregarding all of the doctor’s warnings.

In the weeks that followed, I received three letters inquiring the reason for my not returning to the hospital. The third letter stated all the frightening details of my illness and according to their analysis, I could even die. Furthermore, if death should occur, they would not be held responsible! This last letter caused me to think quite seriously about the whole matter, but the more I read God’s Word, the more inner peace and courage filled my heart.

After some time, I began to suffer great difficulty in breathing due to the continued growth of the tumor in my windpipe. All of the doctors had warned me this would happen, and I now realized that my faith in Christ as healer would be put to the test.

One day while praying, a voice called my name and said, ‘If you were to move to an old house, what would you do first?’ Realizing it was the Lord, I replied, ‘I would have to clean it out: Then He explained, ‘I want to make you My temple; but first, you must be thoroughly cleansed: I knew Jesus had forgiven me and made me His child, but I had never actually confessed my sins in their entirety. Upon confessing them to the Lord, an overwhelming feeling of my utter           unworthiness swept over me and I could only weep before His holy presence. Jesus died in my place upon that cross! A deep appreciation for what Jesus had done filled my soul and upon rising from that time of prayer, I felt cleansed,     relieved, and completely free from my breathing congestion.

One morning, I was awakened by breathing difficulties such as never before   experienced.  Each  breath became  a struggle between  life and death. Somehow managing to get to my knees, I cried  out  from  the depths of my heart, ‘Lord Jesus, if You heal me, I will do something for you!’ Apparently, He had only been waiting for my complete surrender to His will. Suddenly I coughed deeply, and something strange came up into my mouth. Spitting it into my hand, I looked to see what it was …it was the tumor! I was free at last! Jesus had healed me just like His Word promised. Glory to God! But there is yet another miracle that must be told.

What a joy it was being able to eat and breathe normally once again; but there was still something left in my throat-a part of the ‘tracheal tube: The doctors had not removed it, thinking I would return for the second operation. At times this object became quite painful and annoying, so I began to ask the Lord to move it out of my  throat  as He had done with the tumor. Each time I prayed, it would actually move up in my throat; but then it would cause tremendous pain and often bleeding would start. I finally stopped praying about it altogether and began praising God for His love.

Then one day a different way to pray came into my mind. I asked Jesus to        dissolve this object in my throat instead of causing it to be moved out. Sure enough, that was just exactly what the Lord wanted to do… and He did it! He    dissolved it completely!

The doctors had only given me six months to live, but many years have already gone by and I am still alive and well all to the praise of His glory! There is no  obvious sign of any scar, and the physical examinations and X-rays I have had since then only prove the fact that Jesus healed me perfectly.

Since that time I have been obedient to the Lord according to His Word by taking water baptism, and the Lord Jesus has also baptized me in the Holy Spirit two distinct, but very essential experiences for evey child of God (read Matthew 28:19, and Acts 2:38). Continuing faithful! in the promise that I made unto the Lord on the day that He healed me have been serving Him and telling everyone about the great things that Jesus has done and can still do. He is the real God!

Why not surrender your whole life to Him today? If you are sick or have any needs at all, call upon Jesus. For He has promised, ‘If ye shall ask anything in My Name, I will do it.’ (John 14:14)

“It is no secret what God can do, what He’s done for others He’ll do for you!”